In this post, I am going to show you the effective ways to remove mould from carpets by Clean Group. Keep reading.

Is your carpeted area in your office or commercial building being smelling strange lately? If yes, then you might have a mould or mildew problem there. Mould or mildew is a nasty fungus with a musty smell affecting both the carpets as well as the people especially those who are suffering from serious allergies, asthma or other medical conditions.

When you notice dark brown, green or black circles, on your carpet’s surface and smell a stinky and dank smell then this is your first sign of a mould problem. Mould damages the carpet by eating away at the fabric and if left untreated can get very difficult to completely remove it. And in order to preserve your carpets, you need to deal with this problem at the earliest as not attending to it soon can lead to spreading of mould in more areas.

Yes, you need professionals to deal with this kind of carpet problems but till your carpet cleaners arrive you can follow the following steps to deal with the moulds on your own:

Well, before you jump into the process of removing mould on your own here are some aspects you should be considering:

1. When you are trying to remove the mould on your own make sure you wear proper coveralls, goggles and a facemask as mould can penetrate through the skin pores or even enter your body through breathing.

2. While treating the mould make sure that you keep the doors of the designated room closed so that it won’t spread to other areas of the facility. For proper airflow, you can keep the windows of the carpeted room open.

3. Given that it is possible for you to move the carpets from its place, then take them outside and leave them under the sunlight for 1-2 days. And if they can’t be moved then you can use a humidifier or a fan to dry the carpets.

4. After drying the carpets, use a string bristled brush to remove the dried-up mould matter from the top as well as the bottom surface of the carpet.

5. Once you remove the mould debris spray an anti-mould solution on the carpet and let it dry. You can follow the instructions given on the spray bottle. Spray the solution twice on both the top as well as the bottom surface of the carpets.

6. Lastly, use a dehumidifier for the next two days to scrap out the remaining mould debris from the carpet.

Cleaning Products You Can Use

Along with using a store-bought anti-fungal spray used for treating carpet’s mould you can even use the following substances for removing moulds:

Hydrogen Peroxide or Bleaching agent:
Both these chemicals are extremely effective for preventing the growth as well as killing the mould formed on the carpet’s surface. You just have to mix 1 tbsp of hydrogen peroxide or bleaching with 8 tbsp of water.

Vinegar and/or Baking Soda:
Both these elements are best for hindering the development of mould where baking soda is very effective in removing the unpleasant odour of mould. When using vinegar, you can apply it directly on the surface and leave it to dry for some time before cleaning it out. While with baking soda, you just need to add a little amount of water to the baking soda, apply it on the surface and let it dry. After that, you can either vacuum the area or remove the debris with a brush.

Hence, these were some foolproof methods which you can implement on your own to protect your carpets against mould. After attending to your carpets, make sure you call the professionals such as Sydney Clean Group for the appropriate carpet cleaning as only professionals would be able to deep clean your carpets. 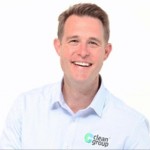 Read More About Stephen
Say Goodbye To Your Cleaning Worries

A lot of us had underestimated the importance of having our workspace clear and clean. Disorganized environments decrease a person's focus, performance, and time management. It also increases the stress level. Maintaining a clean office will save you a significant...

Working for 40-hours a week or 8-hours a day can be draining and stressful. It can be harder if your office is disorganised and dirty. It is about time for you to work smarter. Let us share with you the...

During this pandemic, almost all businesses are looking for the right cleaning company that will make their workplace a haven. Commercial cleaning business is indeed on the rise. A lot of business owners who operate office cleaning services make sure...

Sorry, comments for this entry are closed at this time.